It's acid time again, this time with the new Behringer TD-3, which I received 9-Mar-2020 in black for my birthday, which really looks the part.

It seems like many I just can't drop the fetish. I have an X0xsh0p X0xbox, TB-3, ABL3 plugin, Rebirth on iPad (got it before Roland forced it off the store), heck even MC202 gets close with the right settings dialled in, then there's Roland Cloud's 303 which I venture onto when subscribed to that. How many clones do I need? When will the journey end? All for a once throwaway piece of equipment that has since gained iconic status.

I've never owned a real TB-303 and probably never will, but I realise clones do vary. Even with my own collection I know that certain lines will work better on certain machines than others, so usually pick the one based on the track. I also believe there is no such thing as the penultimate 303, since clones tend to take nuances further than the original, often in good ways, so they can work better in certain situations.

So I was generally settled with my 303 coverage until the TD-3 came out. I even tried to avoid it, but gave in...

So what about the Behringer TD-3?

First off, the TD-3 is extremely cheap, analog, and after having watched certain YouTube videos, decidedly closer than I first thought.

So I unboxed it, and after some initial frustration reading the manual (which insists on language variations after every single section), having to do a software update to get MIDI slides, and problems getting the software to work in Windows (known issue: won't work unless all sound devices were disabled, 14 in my case, so ran it on a Mac laptop), and various forum troubleshooting later, I was eventually ready to try it out after a bit of a false start.

First up the sequencer is the same as the original, which let's say is an acquired taste, and coming from Rebirth & X0xb0x I didn't quite expect it to be worse than those, but it is. However, you do get used to it. It of course is better than MC202 (see programming in related videos below). I tend to use ABL3 to sketch out a pattern then look to put it on later or trigger by MIDI. I do respect the way Behringer have gone for authenticity here, as someone would likely complain if they didn't and might accidentally miss a happy accident!

One thing I did notice about the TD-3 is the low output volume, which I'm boosting a lot on the mixer preamps. You'll notice in the video there is audible background noise, this is because the TD-3 is going into the SE-70, then the SE-70 boosted to get the signal to a sensible level, so I'm amping noise from both (a preamp staight after TD-3 would've been cleaner).

How does the TD-3 sound?

This is the slightly interesting part. i immediately compared it to the X0xb0x and ABL3. As always, each had their own tiny differences, with no decided winner. Some sounded better than others at different settings, and indeed some were weaker at some points including the TD-3.

The TD-3 has a slightly "flatter" sound I would say, but that's not necessarily a bad thing, and it's a bit like Rebirth in some ways. Because it has this sound, one of the first things I noticed is how well it distorts, not only with it's own inbuilt distortion (which is very nice), but also through the Boss SE-70 and guitar distortion plugins. And this was the deciding factor for me to keep it after initial frustration, plus the fact it looks good.

ABL3, MC202 and Roland TB-3 distort nicely, but the X0xb0x doesn't always distort well, especially with resonance fully up, so it needs to be dialed back or the high frequency content seems to wreck the distortion. Eq before distortion could possibly sort that out.

The final thing useful about the TD-3 is using it as a MIDI to CV converter, also shown in the video above. And the MIDI pattern sync or just triggering notes/slides/accents works a treat (even from OctaMED!).

What is the best?

I'll start off by saying I am not a purist and will reach for whatever is there. When you start a song on an instrument, a funny thing happens in that it gets etched into your brain. I've started 303 lines on ABL3, put them onto X0xb0x, but then came back to ABL3 either because of this brain etching or just because it seemingly sounded better in that impromptu moment and fits better with what's now around it. And vice versa when starting elsewhere.

Roland TB-3 is furthest away from the original, but that's why I like it. A 303 sequencer, which a bunch of great other sounds, performance features, and various effects. It has a modern glossy sound that I like and good bass depth to it. In some cases it exaggerates the original 303 in really positive ways. I like this machine because of it's differences and after picking it up cheap (£100 off ebay) wouldn't sell it. Plus, it is has a lot of hidden things in it that make it a fully fledged synth in many ways (hidden sysex if you Google).

ABL3 is my main go-to 303. It sounds really good, perhaps a bit more mid rangy like VSTs tend to be, but it does the accent thing really well. As well as standard programming it has a great pattern based programmer in it. For sound I would not hesitate to use this, plus it's fast and you can do multiple instances, replicating a Rebirth style environment if you want.

X0xb0x earns its place because of it's easier programming, shuffle and transpose, and the X0xsh0p one is also extremely authentic. It is a pity the TD-3 doesn't have CV in (only out), as I would happily use X0xb0x's rather nice sequencer to drive it in a hardware only capacity. It may be possible to mod it for that, so I might try that. Heck at this price point, it's decidedly safer than taking apart the MC202.

MC202 can get very close to a 303 in places, but it is effectively an SH101 without the noise source. It has a Juno feel to it (run it through TAL chorus and you're there), the PMN and self oscillating filter are great, making it very much it's own instrument. I've looked to sell this machine a few times, then I switch it on and the decision is immediately reversed. I bought this cheap a long time ago, got it CV modded, and despite being bruised and battered, it still works well and does its own thing.

Rebirth I still love on the iPad and that's what got me into 303 in the first place when I had it on the PC (prior to that I was chopping 303s in trackers). Rebirth is cool because of the additional pattern based filter (PCF), distortion, simple delay and the mix of classic 808 and 909 drum machines too. Within its confines magic can happen, like putting an 808 through a PCF and distortion for great accompanying patterns, plus the mods that come with a host of different sounds (and are included on iPad version).

So for me there is no clear winner and there probably never will be! 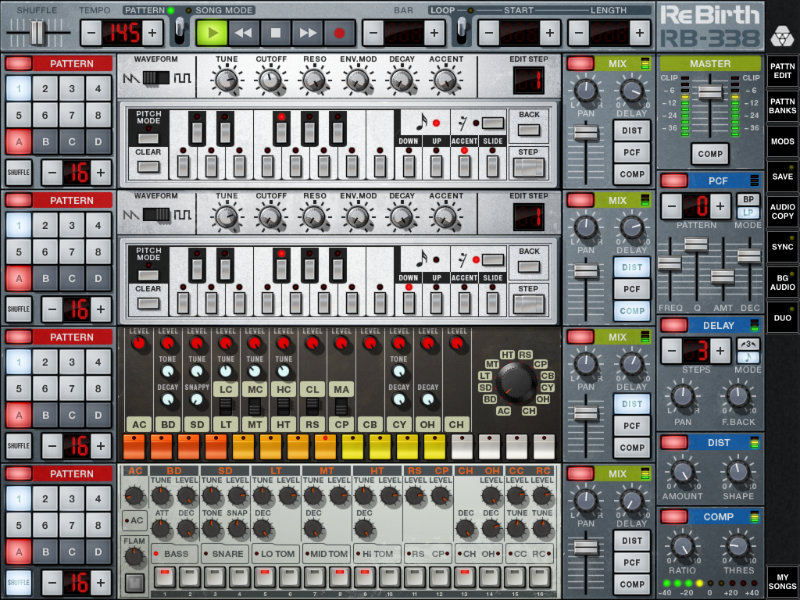 Coming from Rebirth, I always try to put boxes through effects units or layer them together. Doing a simple pattern then letting say a 3 step delay "carry the pattern" onwards is something I like to do (and is in the video above).

The first time round in the 90s when X0Xs were prevalent, producers quickly got bored with the dry sounds and started driving them through all sorts of gear. This can be witnessed in many tracks, in fact listen to this belter of mix for some classic examples: